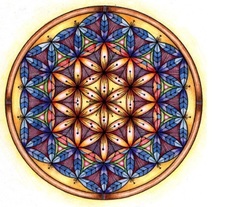 What is Sacred Geometry?

Anyone can draw a geometric form and it is just geometry; but when you relate spirit, consciousness, or divinity to geometry, you're creating Sacred Geometry. Therefore, Sacred Geometry uses geometric models to help us understand the evolution of consciousness and the divine nature of human beings and the physical world. Through these models, we can learn to tangibly understand our own divine nature and creation itself.

For example, the model to the right is an artist's rendition (by Yvette Baez) of the ancient Flower of Life pattern that has been found in temples, burial sites, and sacred locations around the world. The pattern, shown often in the works of Leonardo Da Vinci, has a unique quality. Within this pattern, all the geometric forms known in creation can be found. Thus, the Flower of Life symbol is known as a symbol of Creation that clearly expresses the unity of all "separate" objects in creation.

Geometric models mirror our consciousness. Just as our bodies are expressions of our consciousness in a physical form, the physical geometric forms are representations of the original geometry of light that exists beyond the physical level. On this original level beyond the physical, geometric forms fluidly transition into each other, representing how our consciousness continuously transcends and moves into higher and higher states of evolution. The key element that ties the geometry together is that of the spiral, creating a tree of transcendent geometries that represent our true infinite nature. Many of the workshops offered in the SOLi School, especially those from Ronald Holt, explore these concepts in profound and yet tangible ways.

Why is Sacred Geometry Important?

When we take the journey to explore Sacred Geometry, it aids us in mapping our inner landscape. Through these powerful metaphors, the unknown becomes known and we begin the process of awakening from an unconscious to a conscious state of being. The teachings of Sacred Geometry help us not only understand, but actively interact with our Divine nature in a tangible way. The ancients knew the power of Sacred Geometry and thus incorporated it into the most sacred of architecture as in some of the most magnificent temples and cathedrals known on Earth. We explore some of these sacred sites in the section called Around the World.

Another reason that Sacred Geometry is important and relevant to us today is because it reflects the fractal and holographic natures of consciousness. Fractals, found in nature, are self-similar patterns that repeat in both the small and large scale. The phrase "as above, so below" is an expression of a fractal reality that points to the truth of our divine nature being reflected in a physical reality, even if we have not yet learned to recognize or embrace it.

Consciousness is also holographic. Put simply, a hologram reflects fractal principles because its properties repeat, no matter how large or small the image. For instance, a hologram of a tree may physically be able to be "cut" into several pieces. But upon closer examination of the hologram, the complete image of the tree will still be present, no matter how small -- theoretically, even beyond the physical and into the quantum level.

It is this ability of Sacred Geometry to model and reflect these important characteristics of consciousness that have captivated mystics, philosophers, and shamans all over the world since ancient times. They have been attempting to answer the age old questions, "How did the diversity within the physical world seemingly come from 'nothing?'" and, "Is there a hidden pattern or template on a quantum level that organizes reality?" These questions invariably lead to, "What is the nature of consciousness?"

By drawing sacred geometry models, learning about these unseen patterns, and seeing the universe reflected in physical reality on small and large scales, we can begin to intuit our place in the cosmos as being an intricate piece of a very large "puzzle." Through the awareness of sacred geometry we come to see the paradox of separation and unity as being two expressions of the Whole -- always pointing us back to the Divinity of creation that is within us waiting to be recognized.

The Platonic Solids - The Building Blocks of Creation

These ideas are perhaps best expressed by Michael S. Schneider in the book, Beginner's Guide to Constructing the Universe:

As ideal geometric patterns materialize, they’re clothed with four thicknesses of garment, four densities of “mother substance,” unfolding as light and thickening through phases of gas, liquid, and solid. In mythic terms, the Demiurge (creator) is said to conquer chaos by dividing it into four elements.

Constructing the universe, therefore, involves the process of volumization. The archetypal field where the patterns first appear is a sphere, a Monad. The geometry that arises within this sphere is obligated to manifest the Monad’s principal of equality in all directions.

Nature adheres to this principle by configuring primary volumes that divide the sphere equally in all directions. There are only five volumes that fulfill this requirement of equality by repeating the identical corner angles, edge lengths, and surface shapes around a sphere.

These five volumes were described by Plato in Timaeus and are so known to mathematicians as “Platonic Solids.” Four were identified by Plato with the four ancient elements, or states of matter, and the fifth, the quintessence (“fifth being”), represents their all-encompassing “cosmos.”

Mathematicians have long known there can be only five possible “equal divisions” of three dimensional space. These are the most economical expressions of space from which nature’s designs derive their characteristics.


So let us examine these five divisions of three-dimensional space that act as the building blocks of creation, and a few more subtle divisions. Leonardo Da Vinci was fascinated by these Platonic Solids and made many detailed drawings of them. Below we offer a comparative chart of Leonardo's drawings of Platonic Solids - first in a solid format, then in a frame format. Next to each image, we have included a simple drawing to help the viewer see it's properties. Please note that we have included additional forms called Star Tetrahedron, Stellated Icosahedron, and Stellated Dodecahedron, which are technically not included as Plato's solids. We include them because they were used by many ancient mystics and studied by Leonardo Da Vinci. They also represent specific states of consciousness that we (the SOLi School) and others explore during in-depth sacred geometry studies.
Mystics through time have equated these forms to various states of consciousness. Because geometric forms are transcendent in their true energy state, they are never stagnant. Thus, they can express the idea of the evolution of consciousness. All the forms ultimately nest inside each other to express the truth of our multidimensionality and the holographic nature of our consciousness. This is a concept that we at the SOLi School use often in our workshops - not only on a philosophical level but through experiential exercises designed to help one tangibly feel this universal connectedness.

* Artwork by Leonardo Da Vinci, directly above and below, is from the book Antologia della Divina Proporzione by Duilio Contin, Piergiorgio Odifreddi, and Antonio Pieretti.

Next: Around the World